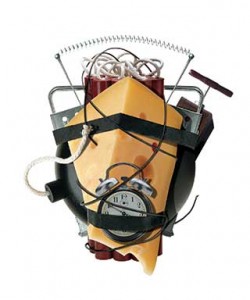 The paradox of choice, or how to blaze a new path.

!!! It is I, Doctor Disturbious, and todays lesson comes from deep in a hidden Tibetan monastery. Yes, saggy bags of crusty vomit, today’s lesson delves deeply down into the realm of choice to serve up perhaps the biggest answer of all. Why we keep doing what we do. It isn’t easy to be a villain these days. Back in the old days all you had a much larger support base for your mad science and evil deeds. Let’s face it- the government wanted you to succeed, the opposing government wanted you to succeed, the whole Third Reich wanted you to succeed. It was a magical time when being a villain was something you got around to, after you made a decent name for yourself as sporting an intellectual boner with a large grant from a secret government agency, or some corporation that was actually a secret government agency, or even a corporation secretly pretending to be a government agency. In fact the very first mind control devices were actually launched by my grand uncle while he was working for the Federal Reserve. They were discarded as irrelevant after invention of the “low interest” loan. That’s a good rule for you kiddies, never rest on your laurels. There’s always someone out there thinking up something more evil than you.

That was the way of it back then; invent a new form of polymer for the government, turn evil, then unleash a people eating blob on a nearby town. Invent a new form of artificial intelligence, turn evil, and send a towering 50 foot metal menace into town. Test a new drug for treating brain decay, turn evil, and send huge crowds of zombies on a rampage into town. Sometimes you didn’t even need to turn evil. Create a new radioactive isotope for power plants; send a radioactive wave of giant locusts head into town. Let’s face it. The only thing harder than being evil today, was living in a town back then. Then there was always some stupid farmer with a pitchfork that would always go out to the barn to figure out what the hell was being so damn loud out there, get bitten, killed stabbed, brutalized, and end up causing whatever it was to develop a taste for farmer flesh. Yes. Yes. Glorious days, children. Glorious days indeed.

And all that turning (cough cough) evil? What did you think that governments weren’t in on it? You think the same guys funding all this crap wouldn’t have pitched one against the other if they hadn’t known precisely what was going on?? We do not live in a world of chaos, little people. We live in a world of order. A little history for you. The word “terrorism” actually comes to us from the French, who brought us such wonderfully dangerous things as guillotines, six hundred and ninety two types of cheese, as well as the French kiss. The word was used to describe the state sponsored policies of cruel and unusual punishment inflicted on the French people that VARY RARELY involved six hundred and ninety two types of cheeses; AND EVEN LESS RARELY involved French kissing.

So come on, who’s fooling who? So let’s get to the real reason why we are sitting in contemplative silence freezing the bits rats will later nibble off. It’s come down to the ultimate test of strength. Free will. In today’s society we have a great many choices. Some could say too many choices. We have choices for food. Did you want pizza, or not so pizza, or burgers, or burgers that taste like pizza, or even burgers that taste like the frozen surface of Europa rewarmed by a cow turd from a cow that ate pizza? Do you want to get married, not marry, cohabitate, cohabitate from a distance, marry yourself, marry others who look like you, marry a jerk, marry several jerks, marry an animal, or marry someone who looks like an animal? Do you want to buy a car, a truck, a hybrid, a hybrid car/truck, a horse and wagon, a suburban, a late model suburban, a van, a mini-van, a micro van, a plane a small plane a helicopter, a fixed wing by-plane, a jet; or a rocket ship so you can fly to another planet where you’ll have EVEN MORE CHOICES!! Do you want to be eaten raw, boiled, fried, poached, cremated, or meet an alien princess/ prince/ commoner who will marry you or not marry you, and have your kids boiled, fried, poached or eaten raw?

The summary is you have a lot of choices to make. Society has made a world bulging with choices like a badly made barbarian loincloth. So the biggest question for you, as future crafters of evil…

“What is it you really want? “

You are born into an era, where everyone has mad skills they can access if they are willing to invest the time. A world where learning doesn’t have to end at pre-school; a world where you can fight and bleed and rise through history. Maybe it’s your history, but never the less you can run out and grab it. You see heroes today are there to support the system. They can lie and deny, but their job only exists because the chaos isn’t running wild in the streets. In order for heroes to work, people must first be taught that evil is bad. If every day was riddled with car chases and explosions, would car chases and explosions ever get the attention of a hero? No. Because they have been conditioned from birth or creation, or even manifestation, that they make what is wrong into something right. Even antiheroes need some law or else they’d never know what to break. Your can’t exactly be a gun totting vigilante in a town full of gun toting vigilantes, or they would quickly become gun toting townsfolk, because everyone would be equal and arbitrarily handing out justice would be so common that no one would even think twice about it.

Thus we need the freaks, the outsiders, and the people who question the perceived order. They are the fish out of water, the ones with the dream of a perfect world, even a world of perfect mayhem. They may be the people with a knife against your throat in a dark alley, but that doesn’t mean you have to put up with it either. You too can cast of the shackles of what is expected of you and return the favor, instead of being a sheep and following the flock.

Or you could follow the flock. After all, that’s a choice. As a whole we have more options today than we have ever had before, but we have fewer supporters. You can’t rely on a secret government institution to endow your miserable anus with enough money to create a super being to obey your command and go off into town to wreak mayhem and destruction. You can’t rely on a private industry to help you realize your dream of creating a seventy five foot python to cruise through the sewers and spring up through toilets to the horror of parents, and the excitement of children.

But what you can do is make things happen by yourself. Because while today’s society may have a lot of choices, and most of them are insanely stupid, there is more opportunity than ever to create your own name at the expense of those big people who offer so few choices. Remember the tallest trees block the most light, but are worth more to lumberjacks.