Just WHO is Joel Rodriguez? Well, Here is a little bit about the guy. A fantastic Indy Creator who is getting attention from the crowd at Each Convention he attends, Why? Check this out:

Joel Rodriguez is the co-founder of Metal Ninja Studios (MNS) and is the writer and letterer of The Dusk County Chronicles (DCC). A lifelong fan of the comic book medium, Joel co-founded MNS with Christina Rodriguez to serve as a creative outlet and a way to breathe life into monsters within his mind. He started writing a five-page short story entitled A Friend in Me in August 2018. After teaming up with Roman Gubskii, that story grew into The Dusk County Chronicles, the first issue of which was successfully funded on Kick starter in March 2019. When not working on The Dusk County Chronicles and other MNS project, Joel works as a freelance letterer on behalf of MNS and has lettered projects such as WTF?! Zombies?!! (Supercilious Comics) and Avani: Origins, #1 (Larry Higgins).

Once You go to Joel’s link You will find this and more about Him:  Joel is the President and lead content developer of Metal Ninja Studios. He is the writer and letterer of the comic series The Dusk County Chronicles, which blurs the line between joyful nostalgia and surprising horror.

When not working on Dusk County or other MNS projects, he also works as a freelance writer, letterer, and editor who has worked on stories such as WTF, Zombies?! (Supercilious Comics), and Avani, Origins #1 (Larry Higgins). He is currently working on titles such as Kooper, Courtesy Clerk Nightmares, Psychosis, Vol. 5, and The Goode Girls and the Ghost of Lockeridge Academy.

Whom is his other half and another wonderful creator and superbly talented individual as well is formidable in Her own right! Christina is the Vice-President and Publisher of Metal Ninja Studios.

She acts as creative consultant for all MNS projects as well as produces all video content, ranging from advertisements to Kickstarter videos. She has also produced videos for comicburst.com.

Together, they formed Metal Ninja Studios in January 2019 and successfully funded their first release, The Dusk County Chronicles, in March 2019.

I met Joel earlier this year and I can tell you He is one hard working Individual, I sat with him on a panel at DaytonaCon in April 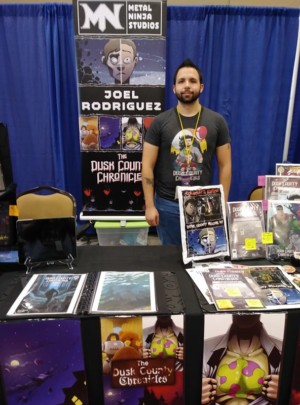 and at the ACME indie Take over event as well – His sales pitch is absolutely immaculate and he will draw You in if You stop by his booth at ANY convention, that’s guaranteed!  I encourage You to check out his works , You will not be disappointed! 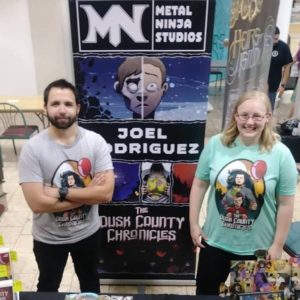 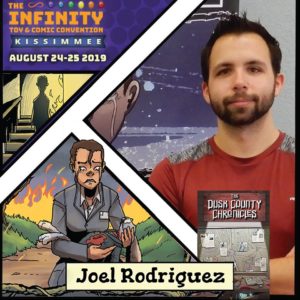 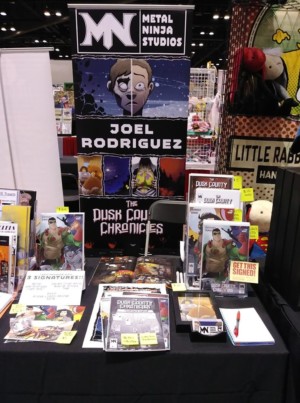