The origin of Horror comics and the early growth of the comic book industry are synonymous. At first there were only a sprinkling of horror stories that appeared in pulp and dime store magazines, but as the fledgling genre began to grow, that would change. With the growth of the industry and the popularity of the comic book increasing,, elements from the popular films of the day began to matriculate into the superhero stories. Villains became more heinous, vampires and werewolves were making appearances, and even some of the scenes became more intense.

By the start of the 1940’s comic book titles started appearing that were dedicated solely to the burgeoning horror genre. The comic company Avon Publications book Eerie #1 (January 1947) is considered one of the first horror comic titles, as well as Gilberton Publications Classic Comics #13 containing the full length adaptation of Robert L. Stevenson’s Strange Case of Dr. Jekyll and Mr. Hyde. Titles such as Suspense Comics were published in the 40’s, and one in particular, Adventures into the Unknown was published in 1948 and ran for 20 years. Even the creators of Superman tested the horror genre with their character Dr. Occult which appeared in New Fun Comics #6. 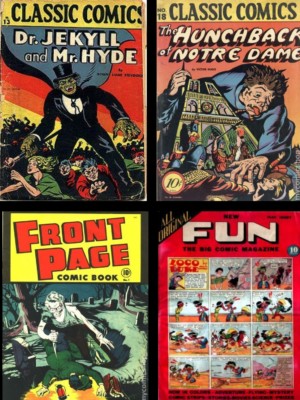 In the 1950’s the Horror Comics genre had become one of the most popular of all comic book genres. Atlas Comics, the precursor to Timely Comics, which is now Marvel Comics, was one of the most prolific publishers of Horror comics, but it was publisher EC Comics which became the outright leader in the genre with its titles, The Vault of Horror, The Haunt of Fear, and The Crypt of Terror, which was renamed Tales from the Crypt. EC Comics dominated until the inception of the Comic Code Authority, which placed a chokehold on the popular standing of comics in general and comics such as the horror genre and the crime/detective genre, which at the time also had a big following specifically. The Comics Code Authority, CCA, stipulated that there be no blood, guts, or mangled bodies; books cannot show scenes of excessive violence; books cannot have the word horror or terror in its title; there could be no vampires, zombies, werewolves or any like monsters, or good must always win over evil, to name a few of the new censorship rules.

These books had a loophole around the CCA mandate which allowed the books to continue to be published, but now in Black and White and in magazine form. The genres garnered the name Noir, which is the french word for black or dark, which not only aptly described the new publishing format, but also accurately described the content these magazines contained. Comic covers began sporting the CCA tag to show they were compliant and smaller publishing companies were put out of business outright by the new self-policing policies.

By the 1960’s, with the CCA firmly controlling the content of what was considered “mainstream” comics, the horror comic industry seemingly faded away into the underground. Charlton Comics, Marvel (the once Atlas Publications) and DC Comics continued to maintain a presence in the industry. Charlton Comics published titles such as Ghostly Tales, The Many Ghosts of Doctor Graves, and Ghost Manor. Marvel continued to publish titles from its days as Atlas Publications as well as publishing some new titles. Some of their titles were; Chamber of Darkness, Journey Into Mystery, Strange Tales, and Tales of Suspense. Towards the end of the decade DC published The House of Mystery, The Witching Hour, and House of Secrets. Not to be overlooked, Gold Key Comics continued its success in adapting popular TV shows of the day into comic books with their titles Twilight Zone, Dark Shadows, and Boris Karloff’s Tales of Mystery. Dell Comics also had their hand in the horror comic industry with their comic adaptations of already established horror properties. Dell published titles such as Dracula, Frankenstein, The Creature, The Mummy, and Werewolf.

With the coming of the 1970’s coupled with both the relaxing of the CCA and the strength of the Underground Comic movement which began at the end of the 60’s, Horror comics made a big, albeit brief comeback. The CCA now allowed the use of the monsters it had once excluded, as long as they were used in their “classical” form The popularity of the B&W magazine resurfaced and the now firmly mainstream comic book companies Marvel ad DC published their own horror comics. Marvel’s top horror titles were The Tomb of Dracula, Werewolf by Night, The Monster of Frankenstein, Ghost Rider, and The Son of Satan, but also included titles such as Fear and Where Monsters Dwell, Where Creatures Roam, Tower of Shadows and Chamber of Darkness. DC provided titles such as The Dark Mansion of Forbidden Love, Ghosts, Weird War Tales, Weird Mystery Tales, and Secrets of Haunted House as well as continuing the House of Mystery and House of Secrets comics. Dell Comics published Ghost Stories and Tales From The Tomb, while Gold Key published Grimm’s Ghost Stories and the Atlas Comic company produced titles such as The Grim Ghost, Planet of Vampires, and Tales of Evil. Charlton Comics published titles such as Haunted, Ghostly Haunts, Scary Tales, and Midnight Tales, which was the first comic book in history to included the name of the creator on the cover. The B&W magazines experienced a resurgence also. The books had taken on the tone of the popular underground comics, and were more graphic and terrorizing than their predecessors. The books also in some cases mirrored the grindhouse style that had become popular during that time. Four publishing companies stood out among all the rest and provided fans with levels of horror and depravity that was yet seen. Warren Publications led the way with its titles Eerie, Creepy, and Vampirella; the latter being created in 1969. Not to be undone, Skywald Publications had titles such as Scream, Psycho, and Nightmare. Next was Eerie Publications.

The books from Eerie were often regarded as amateurish because of the quality of its writing and art, but nonetheless they gained a following. Eerie published titles such as Terror Tales, Horror Tales, Tales of Voodoo, Witches Tales and Weird. Marvel’s offerings to the resurgence are hinted at being the blame for the demise of not only the genre, but was responsible for one of the companies to close its doors. Tales of the Zombie, Vampire Tales, Monsters Unleashed, Dracula Lives, and The Haunt of Horror the titles published by Marvel.

The resurgence and Market for the horror comics faded by the end of the 70’s and not only most of the horror titles, but a few of the companies that published the titles had gone out of business, The market had all but dried up and as with all good things, the craze had come to an end. The ride was exciting to say the least, and the material that came from the Horror genre still makes an impact to this day. EC Comics still stands out as the standard in early horror comics and can lay claim to seeing one of their Tales From the Crypt property becoming one of the biggest horror icons ever.