Article  9 features an amazing writer by the name of Meggie Russell! Meggie Russell is a twenty-four year old aunt and sister, as well as an adult on the autistic spectrum. When she’s not writing or poking fun at herself, she can usually be found enjoying both modern and antique literature alike, especially in the horror and comedy genre.

I met Meg at Space Coast Comic Con’s premiere event some years ago. She stopped by my booth along with some of her friends, introduced herself. It wasn’t the fact that She purchased a few of my comics and struck up an amazing conversation about writing and the wonders it entails but she also conversed with myself and my wife about some of the amazing products that she was working on herself. Within 3 minutes of her conversation I knew just how superb of a writer she was. Here it is a few years later and I have referred some persons who were interested in writing and creating stories Her way. She has an incredible sense of story telling structure and what it involves. As one can see from the excerpt below from Meg You can see how creative she really is:

“What Remains of Edmund” (2017) is a 1900’s stylized psychological horror that explores Nyctophobia, a crippling fear of the dark. For years, Edmund’s life has run smoothly… Until the hours of night arrive. In its depths creep a rapid descent into the psyche and the madness that follows not in the wake of personal demons, but simple human existence. “He saw them, ingrained as vivid images at the forefront of his consciousness – Beings so gaunt that they were as skeletons encased in blackened skin, eye sockets emptied and toothless jaws agape. They stood unmoving, devoid of any indication of life or sentience, yet they burrowed their way into his very existence and sanity! He knew – He knew! – the dark spectators would drag him away if presented the ripe opportunity! He would not be fooled by such a passive charade! They would not have him!” 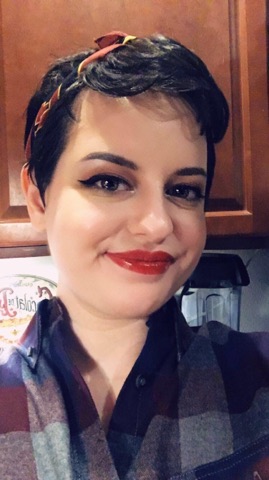 “Delilah and the Nobodies” is an in-development urban-fantasy that follows a young woman after her own murder, leaving her spirit to pass on to Nowhere; A plane of reality that mimics the real world, filled with wandering spirits and the dangers that feed on them. The name of the game is simple; Delilah can only escape and find peace once she has vengeance. But in a world where very little is as it seems, even the most basic of acts come with unearthly consequences. A sigh wafted from Arthur’s nostrils, carrying with it the air of a complex situation and all the words unsaid. She could see it in his eyes, dancing just behind free strands of hair, but never glancing to her. His jaw clenched as if to carve the echoes of “I’m sorry” and “I don’t know” into the jaw with firm-gritted teeth. Delilah herself gulped, realizing with a quick inhale that she’d stopped breathing for a moment. Whatever had happened, whatever would happen, it wasn’t his fault. Maybe he’d forgotten that; Something of a hunch told her it wasn’t the first time he’d had this conversation, nor would it be his last. With a sense of pity, she lifted off from the back of her chair, bridging the gap between them with an outstretched hand, resting it upon his own. Guilt-ridden azure eyes met her there. Silent, unsure, lost… “Don’t worry about it.” She said, feeling her lips curl to a smirk, “I’m already dead. Not that I’m feeling lucky, but something’s gonna have to try pretty hard to top that.”