ICC’s Baker’s Article #56 goes to none other than Caleb Thusat,

Many of our creators find inspiration from various aspsects in life.  Mr. Thusat has some very strong words about inspiration. When you read His story I am sure that You can some how relate.  Creating in this industry sees all kinds of levels, some levels are easy and many are frustrating. As an Indy creator one has to find what keeps him going, what makes him tick, one’s personal inspiration. I really think Caleb found His a long time ago. Here is His story.

” 5 years ago I decided to start writing comics. Many years before that, I went to college with a focus on film and writing and spent a good number of years in the Chicago area trying to pave a path to filmmaking. After living the indie film producer life for a brief period of time, I decided that was not the life I wanted. My ideas were too big for independent filmmaking. I had dreams of science fiction epics, fantastical ghost stories, and superheroes. I had always been a casual comic fan, but in my 20’s I read Watchmen and it really opened my mind to what you could do artistically with the comic medium. After attending a panel about starting a new creative career at C2E2 about 6 years ago, I decided I was going to dive head first into creating comics.

I went home and wrote three first issues of three separate series and then chose one to move forward with. That book would become Alter-Life. I had zero following on social media, zero connections in the industry, and zero idea what I was doing, but I was determined to find a way to make this my future. That spring I launched my first Kickstarter for the first issue of my sci-fi series, Alter-Life. On the very same day it was funded, my boss from my 9 to 5 job called me and let me go from a job I had been working for 9 years. I took it as a sign. 13 Kickstarter campaigns, 2 graphic novels, 2 children’s books, and a number of failures later, I just signed my first deal with Scout Comics for my children’s series, Supercats! I’m currently working on a number of Supercats titles for Scout’s new imprint Scoot, running a new Kickstarter for my crazy time travel concept Flytrap, developing three other series including a modern take on Peter Pan, and have zero intention of slowing down. Throughout my past 5 years of writing and traveling, pitching and tabling, creating and crowdfunding, there was one piece of advice I heard over and over from well established writers and artists along this journey. That advice was simple… don’t give up. I took that advice to heart. This business is a marathon. No matter how much I wanted to, I never did. Creating is part of me. I’m a better person when I’m spilling words onto a page. I started mostly writing science fiction and horror comics, but that changed when I became a parent. Supercats was born from silly games we would play with out cats and toys, and being a father has really changed how and what I want to write. I find inspiration in my dreams, my family, my experiences, and my desires. Comics have become a part of my soul, and I hope to keep my soul alive and happy for a long, long time”

There you have it, incredible story about what it takes. You can also see more of what He’s doing at these links:

Keep up the awesome work Mr. Thusat, that’s what we as Indies love to see! 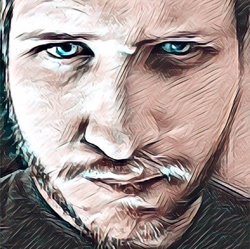 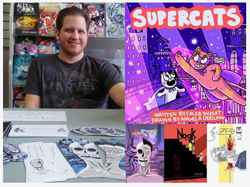