That She is absolutely amazing! I recall meeting Ms. Engle a few years ago at one of the Conventions on the Space Coast, at that time she had quite a few people at Her booth while She was talking about her books and stories. She Always seems to have a crowd at her booth, I assume that is because She has great books tells great stories and is an amazing writer. Folks who had just left from her booth were talking about what they learned at Her table and about Her books, that says a lot!  She has been featured on a multitude of shows, interviews, podcasts and more. She is one of the elite in this creative game and shows no signs of slowing down, and even Her Cosplays are pretty cool too! We are glad to say that we can call Jaimie a friend of ours.  Keep an eye on this superb creator as big things are in the horizon for Her.      Synopsis: A society on the brink of Apocalypse. For 200 years, man and wolf-shifters co-exist in Vithalia, with the night of the full moon belonging to wolves and any human stupid enough to be out after dark. Only now, wolves break their bonds with the Dreadlands before the Wolf Moon rises. A boy and his sister hold the answers in their blood, if they can reach the city by the sea in time to prevent the Apocalypse. Family secrets unravel as two Vikings race against the Wolf Moon rising. “Dreadlands weaves Viking lore, animalistic-shape-shifting (wolves), and coming-of-age adventure into a fantasy epic.” –Kirkus Reviews  photo credits: Lady Byrd Productions, Lauren Edinger.

Here is a short Bio on Her:

Jaimie Engle is an award-winning children’s book author from Melbourne, Florida. Before releasing her anti-bullying fantasy adventure, Clifton Chase and the Arrow of Light, she ran a body shop, played an alien on TV, and managed a hip-hop band. She creates character driven cosplay, where magic turns ordinary into extraordinary, and crafts story-scented candles to pair with her novels. 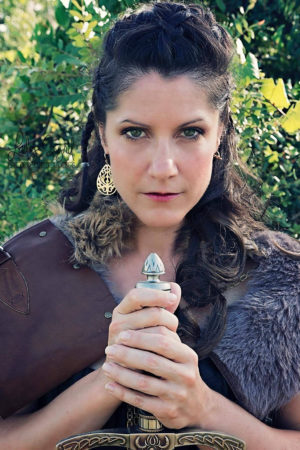