February is designated as Black History Month and is used to highlight the many achievements of Black Americans in US history. These achievements cover many areas and fields of endeavors, and deserve the recognition they garner. The results of one of these achievements continually inspires new generations of Blacks and serves as an example of the “can do” spirit that exemplifies the attitude and energy of these individuals. 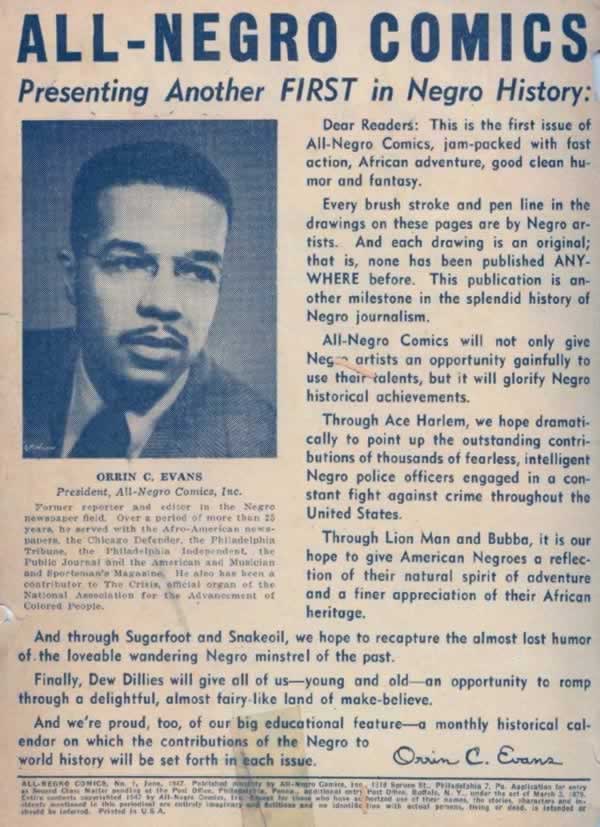 In the early history of comics, the representation of Black characters started to take a stereotypical tone, and went from Lothar, who is the first Black character to appear in comics appearing in the 1934 Mandrake the Magician, to the likes of Whitewash Jones, a character appearing in the Young Allies comic books. In 1947, in response to the representation and portrayal of Blacks in comics saw another first spearheaded by noted journalist Orrin C. Evans, who was once referred to as the “Dean of Black Reporters”, is considered the father of Black Comic publishing formed, along with his brother George J. Evans Jr, All Negro Comics Inc., which was the first Black-owned publishing company in comic history.

Orrin C. Evans was born in 1902 to George J. Evans, Sr. and Maude Wilson Evans. Orrin’s mother holds the distinction of being the first Black to graduate from Williamsport Teacher College. Orrin started his career as a journalist at the age of 17 writing for Sportsman’s Magazine and at the age of 19 landed a job with the Philadelphia Tribune, the oldest black paper in the country. He broke the color barrier and landed a job with the Philadelphia Record and became the first Black journalist to cover general news assignments for a white mainstream newspaper. In 1944, Evans wrote a series of articles about segregation in the military for the newspaper, and was a big proponent of racial equality. The series was read into the congressional record and helped end the segregationist practice. The series was considered to be treasonous by some because it was written during wartime, and Evans received death threats because of this.

[Editor’s Note: In the early ’30s, Evan’s job as a general assignment reporter was for the 100-percent-white-staffed Philadelphia Record. Evans was not always readily accepted as a journalist. Meeting with reporters after his son was kidnapped in 1932, Charles Lindbergh refused to start the press conference until Evans was removed from the room. Evans’ wartime exposé of racial segregation in the Armed Forces resulted in death threats.
After the war, the owners of the Record responded to a prolonged labor action by shutting the paper down for good. –Source, Drew Friedman]

When the Philadelphia Record closed, Evans and his brother, George J. Evans Jr., along with a collection of other black writers and artists, went on to create the first fiction comic anthology featuring and all-black cast. The book would also be celebrated for not only being written and drawn by all black creators, but in order to publish the book, Orrin founded the first black owned publishing company, the aforementioned All-Negro Comics, Inc. The company was able to publish only one issue, and although a second issue was planned, the company found itself shut out of purchasing the needed materials to produce another comic by prejudiced distributors and even by the white-owned publishing companies who feared the competition, and who soon after started publishing their own black-themed comic titles. 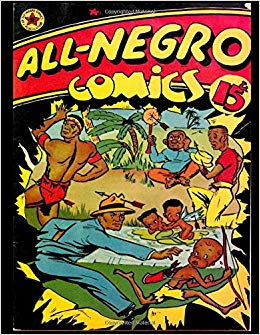 The first issue, aptly entitled, All-Negro Comics, was published in 1947 and featured a variety of stories that covered several genres. The 48 page, standard size comic book with a glossy cover and newsprint interior sold for 15₵ and had a variety of stories with characters such as Ace Harlem, a black detective, and Lion Man, who is an African warrior. The comic as well as the stories was meant to inspire Black people’s pride in their heritage and give them stories that portrayed them in a less than stereotypical fashion.

The stories contained in the first issue:

“The Little Dew Dillies”, children’s feature starring cherub-like creatures that only babies can see and talk to.

“Lion Man and Bubba”, starring a college-educated African American sent by the United Nations on a mission to a uranium deposit on Africa’s Gold Coast, where he adopted the mischievous orphan Bubba.

“Lil’ Eggie”, a cartoon about a henpecked husband named Egbert and his wife.

The book ends with: