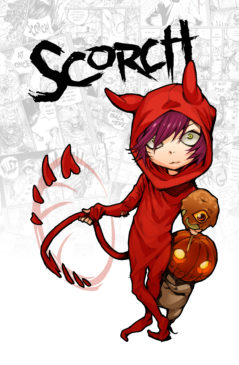 Ash Maczko is the creator and writer of the Squarriors comic book serial for Devil’s Due Entertainment. He is also the creator and organizer of the pop-culture event known as, “Count-I-Con” in Grayslake, Illinois.
Ash lives in the Northwest suburbs of Chicagoland.
Ashley Witter is the illustrator for the comic book serial, Squarriors. Ashley recently worked with Yen Press illustrating and adapting the graphic novel of Anne Rice’s Interview with the Vampire: Claudia’s Story and Anne Rice’s Wolf Gift. Ashley is also an illustrator for the Fantasy Flight card game, Netrunner, the comic book series – Bloodthirsty: One Nation Under Water, and the webcomic – Scorch.
Ashley graduated from Madison Area Technical College with a degree in Animation and Conceptual Development. She grew up in Madison, Wisconsin.

I have some history with Ashley, dating ‘way back to the day a webcomic called Scorch first debuted on DrunkDuck.com. We’ve been great friends—online, at least, since we have yet to actually meet—and even though I remember your work on Anne Rice’s Interview With the Vampire: Claudia’s Story (I still have my autographed copy), the very beginnings of Team Ash, and the launch of Squarriors, I have not had the opportunity yet to make Ash’s acquaintance. The amount of work you two have done since would take some time to mention here. For our readers who are not as well acquainted, why don’t you each tell us a little about yourselves, and what current projects do you have in progress?
Hey there! I’m Ashley Witter. I do the artwork for Squarriors, written by Ash Maczko. The epic saga of warring animals who inexplicably become intelligent after the dying off of the human race. It’s something like Secret of NIMH meets Mad Max. Fans have described it as “bru-tiful”, brutal and beautiful. I am also the creator of the webcomic Scorch. A coming of age story about a girl who feeds souls to her closet monster. Ash and I also do another webcomic together called Cigarettes & Carrot Juice. A story about an all girl gang defending their home turf from the supernatural, set in a cursed 1980’s Santa Cruz. 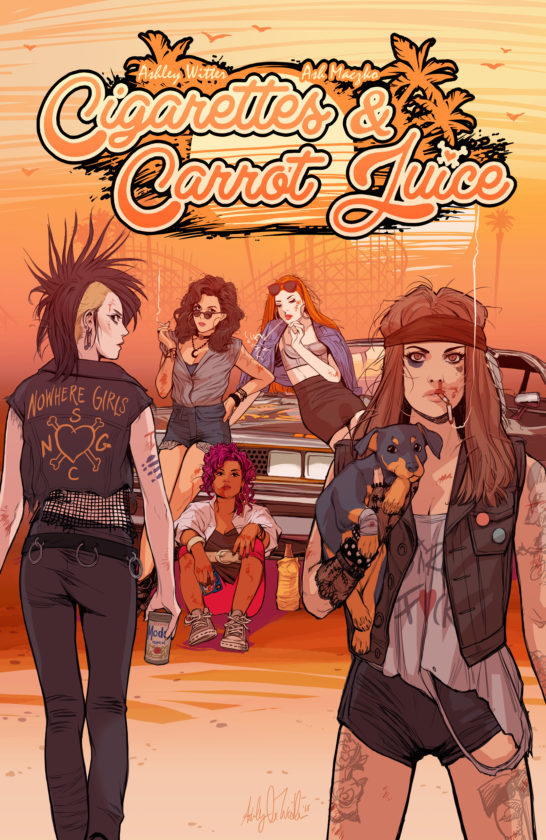 I also do a lot of freelance for various publishers like Marvel, DC, Coffin Comics, Archie Comics, Titan Comics, Fantasy Flight Games, Devils Due Entertainment and more.
Ash Maczko is my partner in life and creativity. He is a writer, a game designer, a talented musician, and an awesome human being. Fans of our work have come to know us as “Team Ash”. 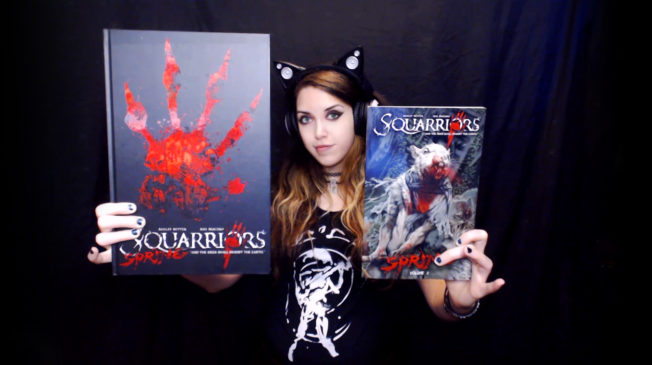 Ashley, I know that you have been drawing since you were able to crawl. Another interesting note for artists of considerable ability seems to be an excess of obstacles to the direction we want to take with our careers. What sorts of obstacles have you had to deal with as artists? How did it shape or hinder your comics career?

Uhm… yeah I guess I dealt with a lot of oppression and nay-sayers when I was young. I didn’t notice much of it because its my very nature to be defiant. It runs in the family, us Witters. If someone told me, “No, you can’t do that.” My response would always be to work ten times harder at it. Not necessarily out of spite either, I was just very good at following my heart and giving my everything to the muses. I simply can’t stay away from something I love, like art.
We recently featured your video Marvel Quickdraw | Ashley Witter x Kitty Pryde on the ICC website. That was pretty exciting! How did you manage to get that gig?
At the time I’d been working for Marvel for almost a year. I think I’d worked up a good rapport with them. I certainly had my personal projects going and built up an audience with that. So, even though I was fairly new to Marvel-fans this was a good starting point for me to get featured on Marvel Quickdraw. I certainly took it as a sign that Marvel was invested in my future, that I’d be doing more work with them. Shortly after filming, I followed up with some formal emails asking for more work and landed a gig drawing X-23 covers! 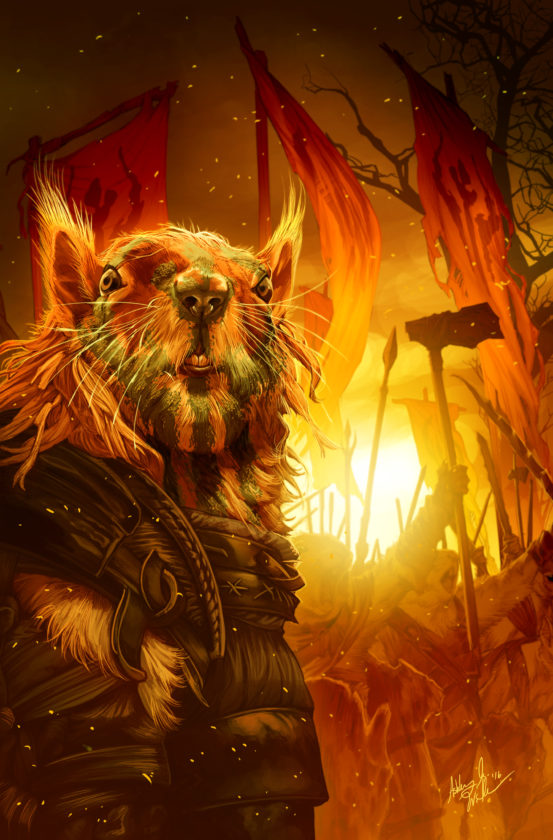 Who has had the biggest influence on you outside the comics industry, and how did they affect your life?
That is definitely Ash Maczko. Before I met Ash I was doing my own thing. I got myself through college, landed my first gig adapting Anne Rice’s Interview with the Vampire into a graphic novel. Right around that same time I met Ash. He used to write comics with his friends in school and I used to draw and write my own, so we got the idea to collaborate on one together which was Squarriors. That catapulted us into the limelight of published indie comics. It was our team effort that helped grow our careers from there.
Who has had the biggest influence on your creative career, and how has that person changed your work?
I have to give massive credit to my professors at MATC (Madison Area Technical College) on this one. Each of them had a hand in sculpting me into the artist I am today. They went above and beyond the animation program. They encouraged me to pursue things that were outside of the box. They gave me life philosophies that I’m still guided by to this day, and a good sense of work ethics. I graduated almost a decade ago and they still pop in to drop some knowledge and encouragement on me during my journey. Haha. They’re rad like that. 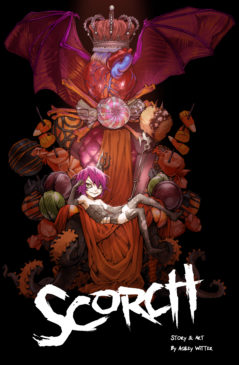 What do you do to recharge your creative batteries?
I play video games, cook, clean, sleep, visit old friends, travel… I consider comic conventions a vacation now. Sure, I’m face-down drawing commissions at the show, but being in a new area, with friends, creating memories is what keeps me going. It’s weird, I feel more at home on the road these days.
Describe your typical work routine. Is there even any such thing as a typical work routine?
Eat, sleep, and drink art, all day. Every day. Including weekends! There’s not much to it. I get up, make a list of things I want to achieve that day and spend all day at it. There’s a lot of time management and balancing deadlines that goes into it. Something I’ve gotten better at over the years. Ash helps me manage my projects too. That’s where the teamwork comes in, we inspire each other to create. 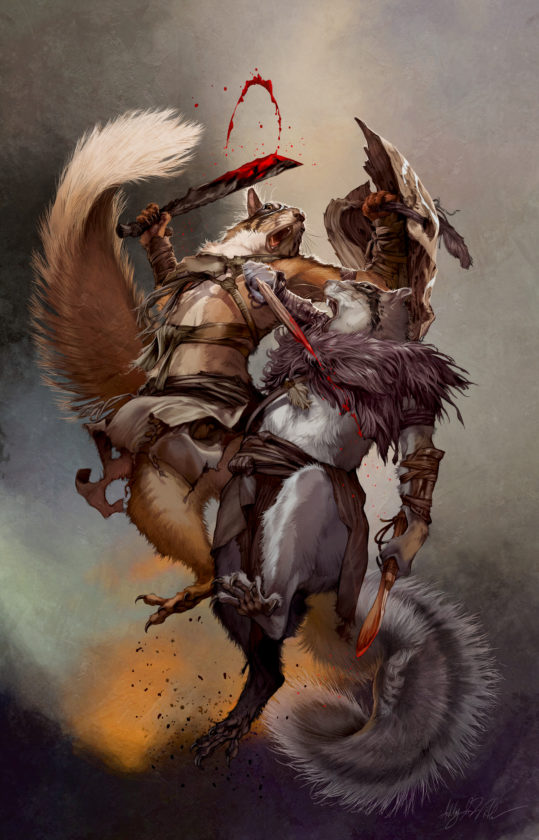 What tools do you use to create comics and what makes them the “right tools” for you? Describe your unorthodox illustration style.
I’ve gotten pretty comfortable with just my Cintiq and Photoshop. I still prefer to do sketches traditionally, with paper and pencil. I mean like, Xerox paper and non-brand-specific mechanical pencils. The tools you use are not as important as your understanding of art fundamentals. (Grabs a megaphone) “Kssshh–I repeat! The tools you use are not as important as your understanding of art fundamentals!”
Which of your projects over the last few years has given you the most personal satisfaction? Why?
Always personal projects. I’m a bit of an eccentric who has a lot to say. Perhaps not in words but in expressions that I can put on paper. My biggest reward has always been when readers relay these expressions back to me. There’s an on-going conversation there.
What has been the most rewarding project in your professional career – in or out of comics or other creative outlets – and why?
Ironically, it’s still personal projects. Doing covers for Marvel and DC is a great job to have. It certainly helps, and Marvel in particular has been very cool and inspiring to work with. And even though I’ve “made it” with them, something interesting happened. I did my first signing at the Marvel booth at C2E2 this year and the majority of fans that got signatures from me were Squarriors and Scorch fans! That was something truly special. 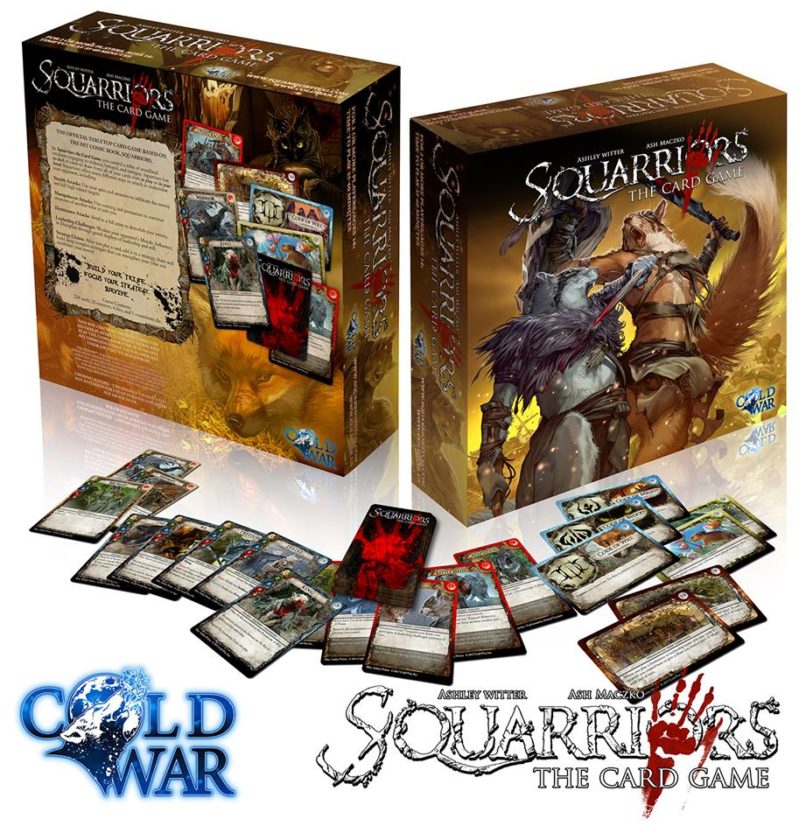 We’ve all met very talented newcomers who are trying to get their first professional projects. What’s the best advice you’ve ever heard given to a promising new creator?
The advice they NEVER take. Do… YOUR… thing! I meet a lot of aspiring artists who are killing themselves to get discovered. That’s not how the industry works today. As the saying goes, dress for the job you want. Apply that to your art. Draw the comics you want to see, write the stories you want to tell. C.B. Cebulski, editor at Marvel, himself tweeted, “There’s never been a better time to be an up & coming creator in comics. Start by making a name for yourself & getting your work seen. Word of mouth is key!”
Time to get philosophical: What’s the most important “big idea” that you’ve learned in life – in or out of comics – and why is it important to you?
Over time, I’m come to find comfort in Nietzsche’s brand of existentialism and teasing my brain with astrophysics theories. It’s nice to compress our busy and chaotic lives into a neat little package that can be completely discarded for a hot minute to embrace the unknown. Lets you get to the core of what really matters.
Where can we buy your work or support your projects?
My personal website should link you to everything, www.ashleywitter.com. I have an online store at https://shopcoldwar.us. You’ll be able to find my books in comic shops around the world. All you have to do is ask. 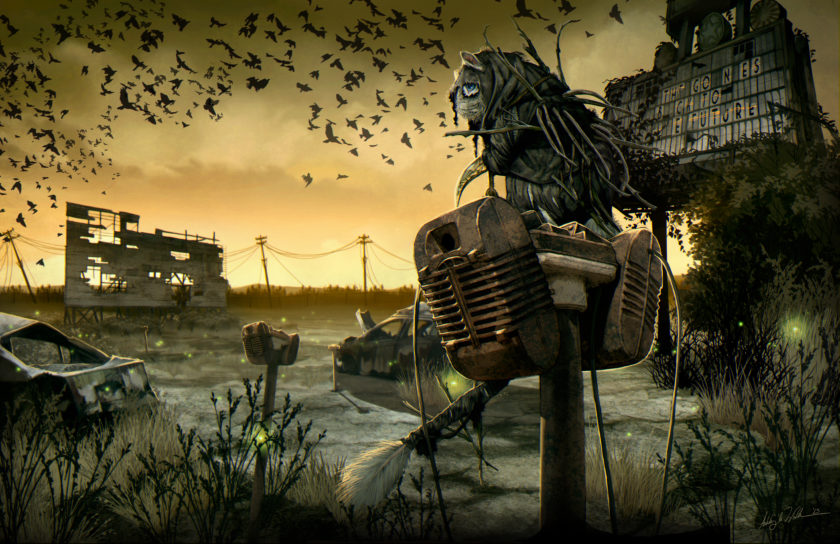