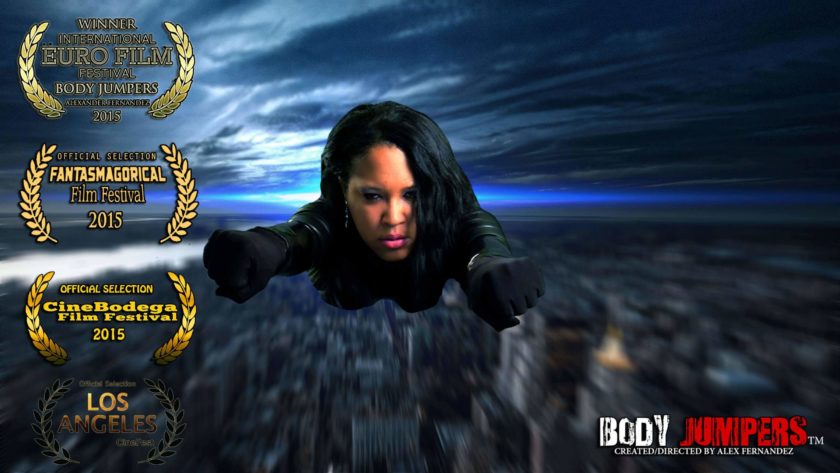 If you check the IMDB (Internet Movie Data Base) with a search for Alex Fernandez, you will find an interestingly modest bio, but this information is clear:

You can find Body Jumpers now on Amazon.com!

We hope that as Alex Fernandez’ career progresses, he will offer us many more interviews in the future.
With the gracious permission of Diana McCray and the Black Talent TV Team. we are offering a reprint of their outstanding interview with Alex from September 10 2017.

Be sure to check out Black Talent TV’s “Be in the Talk” Podcast for positive conversations with filmmakers, webseries creators and graphic novelists, and check out their full page at in this issue of ICC Magazine. Visit their website at http://blacktalent.tv 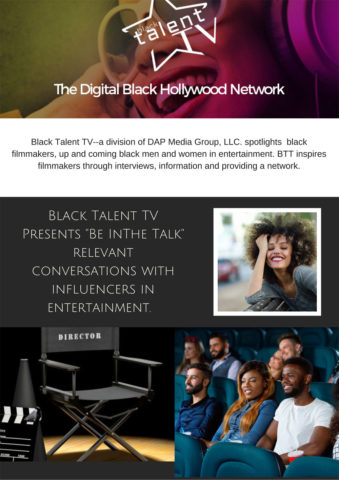 (This interview is reprinted with gracious permission from an interview with blacktalent.tv dated 9/10/17)
Thanks for interviewing with Black Talent TV. Tell us about yourself.
I was born in Puerto Rico and arrived in New York City when I was just 2 years old. By Age 4 my parents were taking me to the movies religiously every weekend. It was six of us kids in the house five boys and one girl and I was the youngest. I guess my parents figured it was a good way to spend some family time and get out the house for a few hours. There was nothing I enjoyed more than watching films, whether it be on the big silver screen or on our one television at home where we would all huddle around like it was a campfire on a cold night. I watched all types of film from foreign, domestic,black and white,silent films and musicals. You name it, I watched it. I sat there for hours on soaking it all in. Even to this day, I still watch at least two films a day.
I always tell people if you want to make movies then you have to watch movies. In 2008 I graduated from Film school with a degree in Digital Film Making. In 2012, I created what would be my first award winning web series Body Jumpers and really from that moment forward it changed everything for me. Because Body Jumpers lead me to create Alex Fernandez’s Dawn, another web series about a young witch turned vampire who becomes a warrior of God. For both my series I do everything with 0 crew. I write, direct,camera operate,visual FX, editing and posters. I also have comic books based on both series.

There was nothing I enjoyed more than watching films whether it be on the big silver screen or on our one television at home where we would all huddle around like it was a campfire on a cold night.”

What inspired you to start doing the web series Body Jumpers and Body Jumpers Resurrection?
My inspiration for the show came from a funny place for an initial idea to create a series. You see as I mentioned before I graduated from film school in 2008 and afterwards I did freelance for a few years. But all the while friends that knew me kept saying “Alex, you need to do something, create something.”
At first i was hesitant, then one day in 2012 I was sitting in my room talking with my friends and I said “I got it. I wanna do a web series about a female hero who lives in Bed Stuy, Brooklyn and saves people and no one knows that she is a hero. Now not only that, I also want her to be black.” I was surprised that my black friends said she needed to be white otherwise it would not be “popular”.
Once I got that response I knew I had to do it. I knew it was not even their fault for thinking that way, that train of thought goes back to what I say about diversity in Hollywood. If you grow up your whole life seeing only white heroes, then just the thought of a black hero or a black female hero succeeding seems very difficult to many people. Then the rest fell in place. 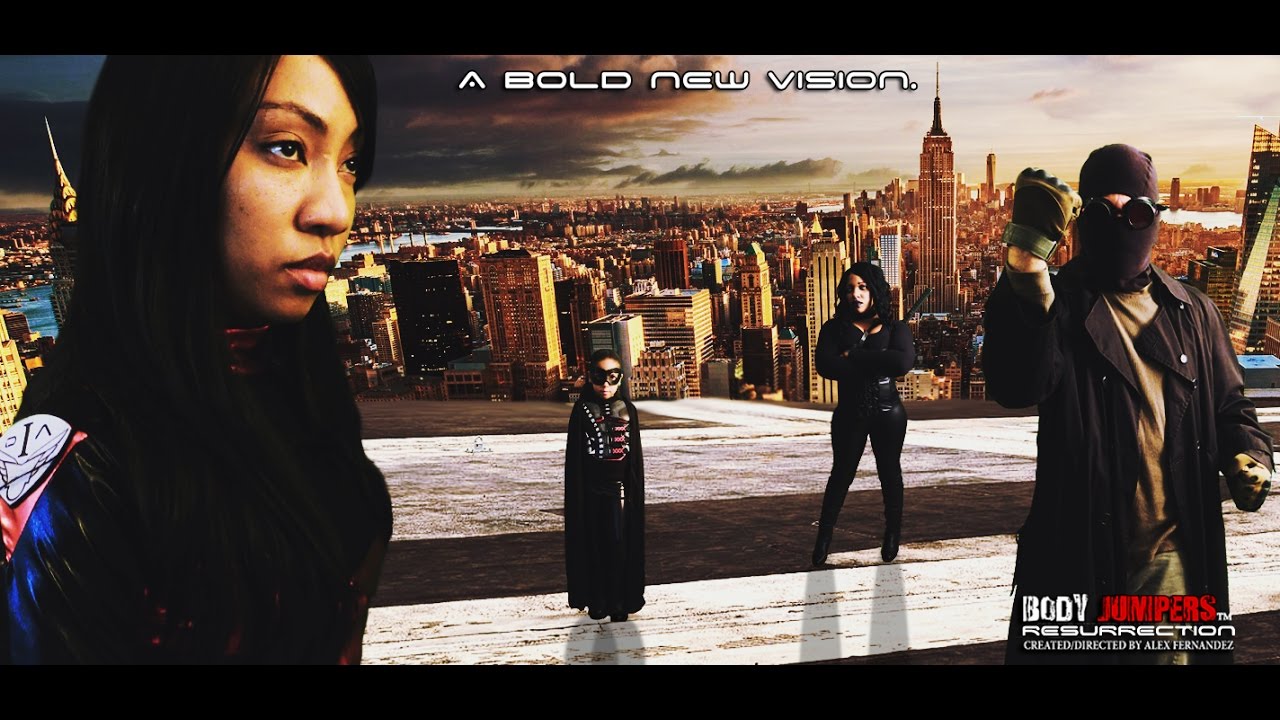 I grew up in the 1970s and my parents and brothers would take me to see a lot of films: all kinds, old and new and some of those films were Black Exploitation films like Coffy, Cleopatra Jones, Shaft, Superfly etc. So I wanted a Pam Grier from space that had similiar attitude and undertones. So that’s what I did and the show grew. I did 2 Full seasons of Body Jumpers, 22 episodes. In 2015 I created Alex Fernandez’s Dawn a vampire series doing a complete Season 10 full episodes. I decided that in the 3-4 years of doing both series my writing and Visual FX, directing and editing abilities had improved so much I could go back to Body Jumpers, re-imagine the series and make it even better then what it was and that’s how Body Jumpers Resurrection was born.
What awards have you won?
Body Jumpers – Best Web Series in the U.S. – The International Euro Film Festival(2015)
Best Visual Fx _ Urban Action Expo (2015)
Alex Fernandez’s Dawn – Best Web Series – Urban Action Expo (2016)
Best Visual FX – Urban Action Expo (2016)
Body Jumpers Resurrection – Best Sci- FI Series – Hip Hop Film Festival/The Urban Web Summit (2017)
Where do you see yourself in 5 years? I see myself still telling new original independent stories but maybe on a just a bigger scale.

I have had the chance of meeting at screenings or at film festivals–they are encouraged by the fact that I have 0 crew members and yet I am able to put together 2 quality shows with good stories and great visual FX and that gives them the energy and the hope that they can do it too.”

How has your web series encouraged other filmmakers? From the filmmakers I have had the chance of meeting at screenings or at film festivals they are encouraged by the fact that I have 0 crew members and yet I am able to put together 2 quality shows with good stories and great visual FX and that gives them the energy and the hope that they can do it too. To me, better than any reward is to receive a message or a letter from a fan saying they have been inspired by my work, or by me. This gives me the energy I need to do what I need to do and makes me want to just tell more stories. It’s a good feeling knowing that we can all inspire other people in the same way other people inspire us.

How have your projects helped diversity in web series? Who inspired you to get started?
Well, Body Jumpers, Body Jumpers Resurrection, Alex Fernandez’s Dawn are web series that feature all female leads. Body Jumpers and Body Jumpers Resurrection both feature main heroes that are African – American females. For Alex Fernandez’s Dawn, the female Vampire lead is a Latina, half Peruvian, half Puerto Rican. The cast on both shows are predominately female and very diverse featuring African American, Asian, Russian, Indian, Latinos, Caucasians and it is two subjects that I think the film industry is for some reason or another still struggling with.There is not enough diversity in the film industry. We need to see more and I mean all minorities in general. I grew up and live in New York City, The melting pot. I would like to see more of a melting pot on screen. I would like to think that with Body Jumpers and Dawn I can show people that you can have a series or film with a female African American hero lead or a Latina hero lead who is not on drugs, a hooker, a mistress,an ex con, a loser mom or comedy relief, doesn’t die first and guess what people will still like it and support it if you have a good story to tell. All the women on both shows are strong characters and I would like to see more women getting a chance at bat in front and behind the cameras. I truly love film: I need film, like most people need water and what really was my inspiration to do it was and is my genuine love for film.

What projects are you working on now? I am currently working on the first season of Body Jumpers: Resurrection and on the second season of Alex Fernandez’s Dawn which launches this Fall, as well as writing the next comic book issues of Body Jumpers, Body Jumpers : Resurrection and Alex Fernandez’s Dawn.
I would like to thank both my series leads and cast members and also my wife who is executive producer on both my shows and the comic books.
–media@blacktalent.tv