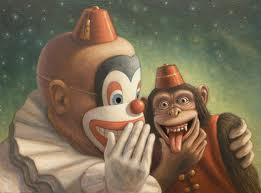 Or why we antagonize the protagonist, and take bozo downtown.

Hello again, you slobbering worms, Doctor Disturbious here! Couldn’t wait for a round two to my Decidedly Evil Education Lecture, eh? Today’s lesson is one of critical importance to everyone who wants to take the path least traveled. Whether it’s blackmailing your local establishment, or putting the end to your arch enemy, it’s important to know what they are thinking, and why. So we need to get into the basic facts, so that you don’t make the mistakes your predecessors did. Remember: “We are the culmination of our fore-bearer’s fears, their horrors, and their failings!” Yes I know, what a beautiful thought right? So let’s get to it.

If I teach you nothing in this class I will teach you that. People (sad for them, great for us) seem to think of themselves as the hero in some great book. If you break down why, you will have their background, their thought process, and why they jump when they jump. Let me show you how this works. We will take my arch nemesis Captain Ethical, and frankly it’s because very few others will.

Captain Ethical (Once Major Ethical but budget cuts to the military he’s been downgraded a couple pay grades) sees himself as the protagonist of his life. While ego maniacal on a level that even I am impressed with, this is also good. This is VERY good. It gives him something he can relate himself to and thus it gives us a way to chart his evolution. With this we can predict what he will do. Captain Ethical is what literary people call a ‘protagonist.’ THIS NEVER ACTUALLY CHANGES!! If you put him in a crowd of people, he is still the protagonist! If you put him at home baking a cake… even something with little frosting ROSE BUDS… he is still the protagonist. If you put him at home with his GIRLFRIEND, he is playa numba one, and still the protagonist. BUT if you put him in a superhero team…GUESS WHAT?? Here’s a switch. No wait, I lied!! HE’S STILL THE PROTAGONIST! Even if you start with a team a member will always end up being singled out more than others. The Protagonist is always the lead, no matter how the characters around him are, and there can be only one.

The people around him when they are out to foil him, destroy him, bust him down, lift him up, get him a raise, give him some sort of alien godhood, etc. WILL ALWAYS BE ANTAGONISTS! This is crucial to understanding, because the girl who’s waxing his board today could be on the rocks tomorrow. This means that everyone other than him, has the potential to be the stone in his shoe, the drag on his life the thing that forces him to hunt the night, because otherwise he’d be sleeping on the couch. These things are predictable. These things are cause and effect. For example I discovered last month that Belinda Baerman, ace reporter and supposedly secret girlfriend of our hero had her mother in law come into town. I immediately scrubbed all evil activities for the next two weeks, and put the word out. Result? Massive frustration followed by epic infighting. His real life trampled his super heroic life, and when he got edgy, she got angry. This is just one example of how with a little careful examination, you too can use any of the antagonists as fodder for revenge. Antagonists are usually tools for “character development” or “how much can I make him suffer before he snaps.” This means that, like the wrath of whatever deity you worship, they’re UP FOR GRABS. And are readily available for parties, bar mitzvahs, and above all sticking it to the protagonist!!

Yes, what I did was incredibly evil, and heroes and villains are supposed to work on the buddy system. I scratch your butt, you bust mine. Boo to that. What do you think? The hero wants to stay home, and hang with their partner, chill with a cup of espresso, AND READ THE BLOODY MORNING PAPER?! NOT A CHANCE IN SEVEN OF THE NINE CIRCLES OF HELL!! These people earn their keep by stuff that goes wrong!! These are glorified security guards moping about “Gee wouldn’t it be nice if no one ever stole stuff” Get that angst OUT OF MY FACE!! We provide a service by letting people who wouldn’t ordinarily ever leave the narrow chamber of mediocrity, be shown as the vast ego peacocks they are!

If they stayed around more so people could get to know them, nobody could stand them. Use those tools to your advantage. Realize that the lack of being around is also what makes heroes so attractive romantically. THEY ARE ALWAYS RUNNING AWAY!! If they ever stuck around people would quickly get bored of them and be like “who is that loser?” Remember. These people see themselves as the protagonists. They think in terms of “hey I lost my parents to a mugger; I must be cold dark and brooding.” But these are the people who even if they hadn’t, would be cold dark and brooding AND on lithium. These are the finest dregs that society can churn to the surface. Don’t be afraid to build on that belief. Shine the spotlight on them and watch them scatter like cockroaches. People will thank you. Not out loud of course, they’d never do that. But in their secret black little hearts will there be a skip just for you.

By holding the center stage spotlights up to them, we get to see shadows that are far more interesting than their pristine stiff publicity packets. For example Captain Ethical spent three months away at Clown College before he went into the military. In fact it was him leaving to go to West Point that caused his mom to cut ties with him. Bless her honking clown hooters. This however left some character building mental scars… and an inability to deal with honking noises and pies to the face. How does he deal with it? He claims that she was a terrorist cell for a secret organization and had to leave her, so that her past wouldn’t drag him down. The press eats it up because of a little known truth, “no one likes the people they’ve been rooting for to be the bad guys!”

So, let’s recap this before Agent Baker comes back and catches me draining I.C.C headquarters of about a year’s worth of electricity for my new robot. Characterization is the profiling tool to find that the ultra-stiff uptight hero actually has a human side. They are always the protagonist. And the antagonists are everyone else who is sucking up the protagonist’s time, effort, and even free will. They aren’t always evil, but that doesn’t always matter either. Research and background are the keys to profiling how the self-styled protagonist will react. Are they a vegan who secretly craves bacon, or do they pick their teeth with a matchbook because they have secret arsonist-like leanings? Every bit of data you glean will help you make this assessment. Every bit of data will help you put a human like face on what is usually a super powered flake with commitment issues and a God complex. This in turn will help you understand, help you relate, and help you formulate a plan to CRUSH THOSE TITTERING FLAKES UNDER YOUR MASSIVE MIGHTY MENTAL MELLON!!

This is Doctor Disturbious telling you to love the skin you’re in, even if it isn’t your own. Evil out!!