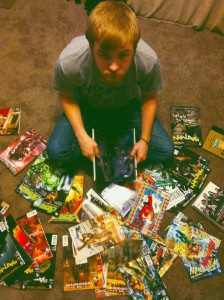 Over the weekend, I saw James Gunn’s Guardians of the Galaxy and I have to say… WOW! This movie brought me back to my childhood. It reminded me of seeing Star Wars for the very first time, which is a pretty big deal to me. Now I know comparing GOTG to Star Wars is sacrilegious in some folks eyes, but in my defense… Star Wars and Marvel are owned by the same company.

The chemistry between the characters was undeniable! Each character was so different yet they worked perfectly together to make an awesome team. Watching Rocket Raccoon (voiced by Bradley Cooper) and Groot (voiced by Vin Diesel) reminded me a lot of watching Han Solo and Chewbacca on screen. Chris Pratt’s take on Peter Quill was great. As a fan of Pratt, I was a little nervous that all I would see is Andy Dwyer from, NBC’s Parks and Recreation, thrown in a science fiction style film, but I was wrong. I felt like Pratt poured a lot of himself into the character, which made it pretty incredible! Pratt made Quill funny and tough. Zoe Saldana’s Gamora and Dave Bautista’s Drax the Destroyer were portrayed as an deadly assassin and a destructive lunatic. During the action scenes, I felt that Saldana stole the show. Watching her kick the tar out of the bad guys was fun and awesome. It was watching a really cool kung fu movie. Bautista was also one of the best parts of the movie. He was funny and crazy, yet you felt for the guy when he began to talk about his past. And last, but not least, we move to the villain of the story… Ronan the Accuser. Ronan was played by actor Lee Pace of AMC’s Halt and Catch Fire. Pace did a wonderful job at making me, as a fan, feel intimidated the second he walked on screen. He’s tough and scary.

The story itself was well done. The pacing was great and got right to the point. Writers James Gunn and Nicole Perlman did a wonderful job at throwing easter eggs into the film to make sure that Guardians stays in continuity with the other Marvel films. By the end, you’re craving more from the Guardians.